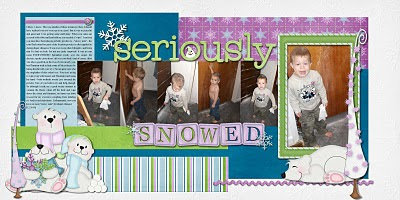 Since it seems that everyone else in the US is getting snow and we aren't, my two little ones decided to make their own in their room with baby powder. I should have known they were being too quiet! When will I learn? 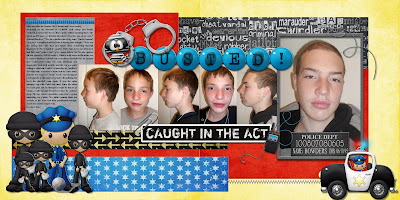 Two of my older boys and a neighborhood friend who was spending the night decided it would be a good idea to sneak out of the house in the middle of the night and go wandering through Hagerstown. Of course, they knew it was against OUR rules (we last saw them going downstairs "to bed"), but what they didn't know is that it's also against the law (there is a 10pm curfew). They were terrified when cops came upon them, questioned them, frisked them and drove them home. Not fifteen minutes later, the doorbell rang again. It was the same cop (now she was REALLY unhappy) bringing Caleb home. He apparently knew the other boys had sneaked out and since he couldn't sleep, he figured he'd go out for a walk through Funkstown. We weren't too harsh on them as I think the police put the fear of God into them.

Digital Kits: "Jailbird" and "Busted" both by Kristin Aagard.

Email ThisBlogThis!Share to TwitterShare to FacebookShare to Pinterest
Labels: 12x12 Layout, 2-page layout, Caleb, Christian, Gabriel
Newer Posts Older Posts Home
Subscribe to: Posts (Atom)
My Designs are Available Exclusively at GingerScraps. If you see my kits for sale or being given away elsewhere, please let me know so that I can take action. Thanks so much!

Lori
Maryland, United States
I am the mom of 6 gorgeous children - 5 boys and 1 girl - ranging in age from 11 years old to 24 years old! I also have a beautiful baby granddaughter. We have a menagerie of pets, including cats, aquatic turtles, a bunny, a "not-so-mini" potbelly pig and 4 dogs (a Golden Retriever, an English Bulldog, a Pug and a Pug/Boston Terrier mix). I have been a nurse for over 28 years now and I love working with the elderly. I began designing digital scrapbook kits in an effort to help supplement our income. We take pride in supporting our own family. In my spare time, I enjoy digital scrapbooking, reading and spending time with my awesome family!